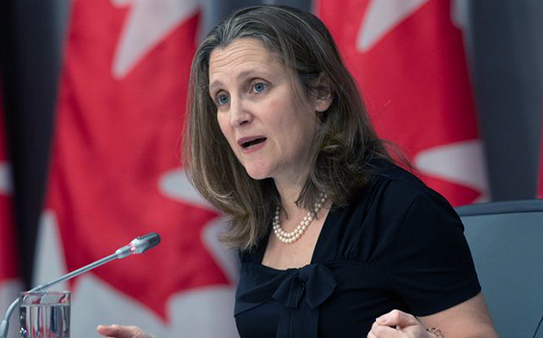 On August 20, 2020, Chrystia Freeland was sworn in as Canada’s newest Finance Minister, shortly after the resignation of Bill Morneau.  Clearly, this is a change to one of Canada’s most powerful and influential cabinet postings and it is occurring during a global pandemic with significant health and economic consequences.  That said, what is also indisputable is the breadth, complexity and the sheer magnitude of the issues currently sitting on the Minister’s desk, awaiting her attention.

Over the past several months, the government and their staff have been consumed with financial, economic and health-related issues stemming from Covid-19, and rightfully so.  Despite the pandemic, businesses that have been temporarily disrupted are now looking to seize upon new emerging opportunities.  In fact, now more than ever, Canadian businesses need the support of the Canadian government to promulgate enabling legislation and regulations that will inject the right stimulus into the markets to allow business, not governments, to help restart the economy.

An efficient national payments system is critical, not only for Canadians but key for a healthy and vibrant economy.  For more than 6 years, Payments Canada has been promising Canadians a modernized infrastructure that would support instant payments, robust data and the ability to rapidly deploy innovative services in response to changing business and consumer needs.   Despite the authorities and direct oversight of the Minister of Finance and Governor of the Bank of Canada, these developments have been met with on-going delays, possibly until 2023-24, some 4-5 years beyond their initial targets.

During this same period, Finance Minister Bill Morneau created the Advisory Committee on Open Banking as a first step in fulfilling the government’s commitment to promoting competition and consumer choice in Canada’s financial services sector.  While other nations are advancing the yardstick toward a paperless economy, an instant economy and one that supports broad consumer-directed or open banking frameworks, Canada remains well behind the pack and risks falling further and further behind.  The implication being that our financial system places our businesses at a distinct competitive disadvantage vis-a-via our international counterparts and hinders the much-needed growth to drive Canada from this recessionary period.

In a recent Financial Post article, “Lack of open banking framework forcing Canadian consumers to choose between convenience and security” (November 2019), Rizwan Khalfan, TD Bank EVP and Chief Digital and Payments Officer, stated that the lack of an open banking standard [in Canada] was resulting in an unfair trade-off that would otherwise allow “PayTechs” to design products and services with the customers’ financial data.  According to Khalfan, this is an emerging problem.  Expediting a view, there are “enough industry data standards available that we can actually leverage one on them and then tailor it to our needs in Canada.”

Each of these issues, among others, can and should be advanced as a critical priority.  Occasionally, I have heard it said that these policy changes may well inject uncontrollable risk into the payments system. The same view had been put forward as a primary argument for continuing to maintain the current and unnecessary access restrictions on Canada’s payments system.  While Payments Canada is taking a serious review of what measures could be pursued to support expanded access to the payments system, it must invite greater competition and establish the right incentives to deliver innovative services.

As seen time and time again over the past 30 years, payments system participants conjure up issues of risk and added complexities in an effort to distract policy-makers and maintain the status quo.  In the early days of Interac, the concept of dispensing or depositing cash at an ATM brought on unsubstantiated fears and delays in a national roll out of service.  However, over time and with the appropriate regulations, users of the system developed trust and confidence in the system.  Today, Interac is a well regarded, world-leader in payments processing.  To expedite the benefits of innovation for the next generation of financial services we need the government to move quickly to create enabling legislation to permit the financial services market to operate effectively and safely.

Canadians have consistently been underserved by their financial services sector, by global comparison.  Our hope is that the new Minister of Finance will see the advantages and opportunities of a more competitive and innovative payments system that will only serve to curtail the widening gap between Canada and other developed nations in terms of payment-related services.  The economic impact of the pandemic continues to have dire consequences for Canadians and we can ill-afford any delays to our national economic recovery plan.  I am hopeful that the new Minister of Finance will make payment-related policy issues a priority and introduce enabling legislation that serves as a catalyst for real economic growth.  The economic opportunities that surround the national payments system are significant and broad.  Now is the time to realize the possibilities.