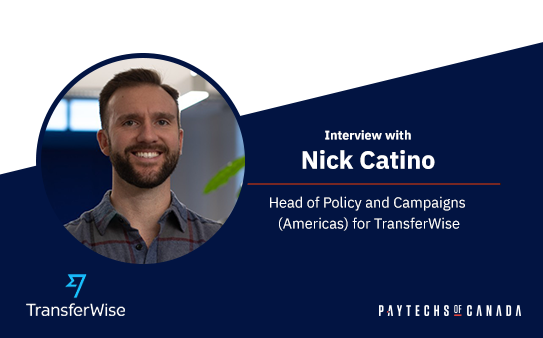 In April, 2018, TransferWise became the first payments service provider to become a member of the UK’s Faster Payments Scheme and directly connect to the system.  In doing so, the Bank of England granted TransferWise a settlement account in the Bank of England’s Real Time Gross Settlement (RTGS) system, affording it opportunities that previously eluded payments service providers.  Nick Catino is the Head of Policy and Campaigns (Americas) for TransferWise.  He leads interactions with government and crafts consumer engagement campaigns to raise awareness and influence policymakers on issues related to international payments.

How would you best describe TransferWise services?

TransferWise is a global technology company building the best way to move money around the world. Whether sending money to another country, spending money abroad or making and receiving international business payments, TransferWise is on a mission to make life easier and save customers money. We’re popular with people who live, travel and work internationally. More than eight million people and businesses use TransferWise to move $5 billion dollars worldwide every month, saving themselves over $1 billion every year.

We offer our original send money product, along with a borderless account that can hold and convert across 54 currencies and local bank details available for the UK, US, Australia, New Zealand and Eurozone.

Additionally, “TransferWise for Banks” lets banks, credit unions and other institutions offer their customers our international transfers experience within their banking app. In December 2019, we announced EQ Bank, the digital arm of Equitable Bank, as our first bank partnership in Canada. EQ Bank integrated our API, allowing their customers to send money right from their Savings Plus Account at the real exchange rate, paying only a small, transparent TransferWise charge and no hidden charges.

How many countries do you operate in?

TransferWise has 2,200 employees across 14 offices worldwide.  TransferWise customers can send money to over 80 countries, covering 2,500 routes.

I understand TransferWise was the first non-bank service provider to directly connect to the UK’s payments system in early 2018.  Why was this form of access necessary for TransferWise?

In 2018, TransferWise became the first payments provider to join the United Kingdom’s Faster Payments Scheme and obtain a settlement account at the Bank of England. Subsequently, on certain routes, we were able to cut costs for customers by 20%, and payments could move instantly.

How is the regulation different in the UK that would allow you direct access to the payments system?

The UK, and the European Union more broadly, developed their own version of a retail payments oversight framework over the last two decades and now offer both e-money and payment institution licenses.

Subsequently, the UK recognized that broadening participation in the payments system would benefit consumers, market competitiveness and the broader financial ecosystem. They made small changes to their eligibility requirements to allow access to payment providers. Overall, this was a three-year journey where we worked closely with the UK’s Financial Conduct Authority and other regulatory bodies to help them understand the benefits of a more open payments system.

TransferWise has been a direct participant for 2 years now, what have been the primary benefits from direct access?  Any specific downsides?

Previously, TransferWise partnered with banks to settle payment transactions on behalf of customers. That resulted in added costs, complexity and partner dependence. Now, as a result of UK direct access, we are no longer reliant on bank partners and their processing times. Our UK customers have the benefit of 24/7/365 instant transfers at much lower cost. Being the first to directly integrate with the UK’s Faster Payments scheme was considerable work, but the benefits to our customers have been significant and impactful to the marketplace.

Would TransferWise be seeking direct access/participation in other countries?

Yes. TransferWise wants to end complicated and costly correspondent banking arrangements and instead connect directly to payments infrastructure everywhere. Both the World Bank and the Bank for International Settlements (BIS) support broadening payments access, and a number of countries are following suit. The UK, EU, Australia, Singapore and now Canada are some of the many countries that recognize the benefits for consumers and the marketplace. We’re in conversations with several other jurisdictions to secure direct access. Expanded payments participation also promotes financial stability and risk diversification when payment origination is handled by more than a handful of the biggest banks. Consumers ultimately benefit from increased competition and innovation in the payments market.

What are the key challenges for PayTech firms like TransferWise participating in Canada’s current payments system?

We’re excited about the recent payment’s modernization initiatives in Canada. We fully support real-time payments. We support the proposed retail payments oversight framework that will bring payment providers under a new regulatory regime. We support continually evolving the Canadian Payments Act that should result in payment providers securing direct access to payment rails. And we support open banking efforts such as the critically important “consumer-directed finance” proposal that would grant consumers control over their financial information and leverage data for innovative products and services.