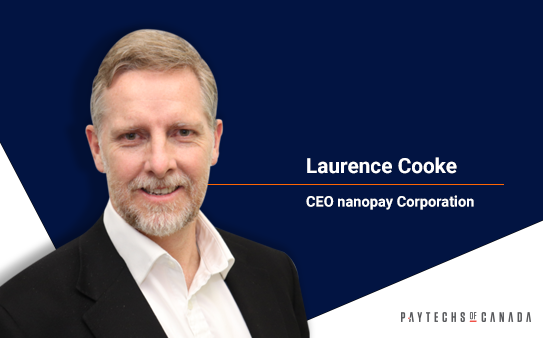 Earlier this week, I had the opportunity to sit with Laurence Cooke, founder and CEO of nanopay Corporation and Chair for Fintechs Canada, to gain his perspective on the importance of the national payments system, its evolution and contribution to the Canadian economy.

Laurence:  When I think about payments in Canada, there is a real lack of innovation resulting from insufficient competition. By nature, PayTech firms have the potential to offer more choices, at reduced cost, and help accelerate growth, but require direct access to the payments system. Consequently, the pace of innovation is much slower than what we are seeing globally. The implications far exceed our financial systems, and extend to global trade, business expansion, cost to consumers, and attracting investment. There is a real risk that Canada will be left behind as the rest of the world progresses.

Laurence: As I see it, there are four major gaps:

Laurence: Canada tends to lead with policy and regulation, which means that the first step for change requires a senior sponsor within the government. Once sponsorship is received, the second step is to assign a regulator with a clear mandate to push the change forward. Thirdly, it’s important that the entity responsible for a new era of modern payments, such as Payments Canada, has an independent board of directors. Today, the board maintains significant representation from incumbent financial institutions, which are unlikely to have the same goals as the broader public interest.

Laurence: We are already at least 10 years behind. There is a sense of urgency as the world of commerce becomes smaller and smaller.  Increasingly, markets are globally interoperable as domestic products and services become increasingly substitutable around the world.  There are large non-bank technology platforms that prioritize innovation, such as Apple, Google, Amazon, and Facebook. These tech giants already have the infrastructure to offer the same, if not better, payment and processing services than a bank. Canada must act now, so that it can continue to compete on the global stage.

Laurence: I come from a third-world country. A common scenario is migrant workers sending money home to their families and receiving the worst exchange rates, while corporations and the high-income individuals get favourable rates. What we are seeing is that the poorest people pay the most [as a percentage of their income] for payments and financial services–it’s absurd.

To compete at a global level, Canada must have a robust and ubiquitous telecom system and a modern and accessible payments ecosystem. We only have the first.  Payments in Canada are by comparison, slow, expensive, and dataless. For a first-world country, this shouldn’t be the case.

Laurence: We achieved success in the telecom industry with global standards; this is why your mobile phone can receive service in any country with roaming. Today, in the payments industry, Visa and Mastercard are the closest thing to a globally accepted payment method, but they are extremely expensive, particularly for merchants.

If we assume global standards are the way forward, we should be able to adopt the framework from these countries.  In a global payment’s ecosystem, “made in Canada” solutions tend to introduce limitations and implications.  Today’s Canadian financial industry has significant barriers to entry, which results in high friction costs and reduced utility. If we want to innovate and compete on a global scale, we must lower the barriers to participation, while maintaining the safety and soundness of our system.

Laurence: I think there are two factors that come into play here. Firstly, we are relying on our government to lead the innovation. The result is putting regulation before the needs of the people. For us to catch up to the changes we have seen in other jurisdictions, we need the government to better enable competition and the market to work properly and let entrepreneurs do the innovating. With this, I believe Canada will flourish as we’ve seen in areas that do not require the same level of government oversight, such as artificial intelligence.

Secondly, Canada as a nation is extremely risk averse. It’s in our DNA. True entrepreneurs tend to stand out here, but this really shouldn’t be the case. Ideally, we find a way to foster innovation within our tolerance for risk in order to help facilitate an environment that encourages entrepreneurship.

Laurence: We are at a fork in the road…and unfortunately, have been at this junction for the past five years. I believe we have two options:

If we choose option a), then we can expect little to change except an increased level of risk from foreign entities ‘eating our lunch’ in the payment’s ecosystem.  If we choose option b), we have an opportunity to save consumers and businesses a considerable amount of time and money and stimulate economic growth and foreign investment in Canada.

The choice is ours to make; we must choose wisely in support of continued innovation.